A five-year contract between the Town of Amherst and the Atlantic Police Association Local 104 was signed by both parties on May 1, officially ending four years of contract negotiations between the town and its unionized police officers.

The arbitrated contract gives Amherst’s 22 unionized police officers and two administrative staff, a 14.52 per cent raise over five years, when compounding is considered. The new contract is retroactive to April 1, 2014.

The previous contract expired on March 31, 2014. Bargaining with the police union began in April 2015. While some agreement was reached, no monetary issues were resolved. The matter went to conciliation in May 2016, but that too failed when the parties couldn’t reach an agreement on salaries. 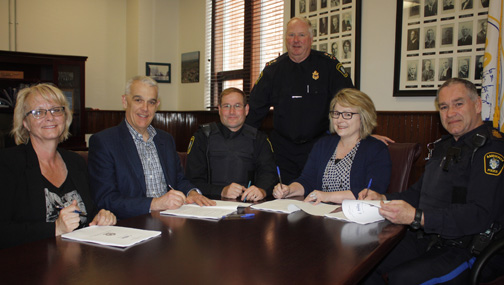 The matter was then sent to arbitration. A hearing was held before arbitrator Bruce Outhouse in November 2016. Outhouse released his decision on Jan. 17, 2018. Council ratified the deal on April 30.

The arbitrated contract puts the salaries of first-class constables in Amherst in the same ballpark as those in Truro, Bridgewater and New Glasgow.