Jason MacDonald has been appointed the chief administrative officer for the Town of Amherst, effective immediately.

The appointment was confirmed by the Amherst town council during a meeting on June 28, 2021. It comes just weeks after MacDonald was appointed the town’s interim chief administrative officer following the resignation in April of former, longtime CAO Greg Herrett.

“It speaks well for the depth of our organization that we were able to find a suitable replacement for Mr. Herrett within the ranks of our own employees,” 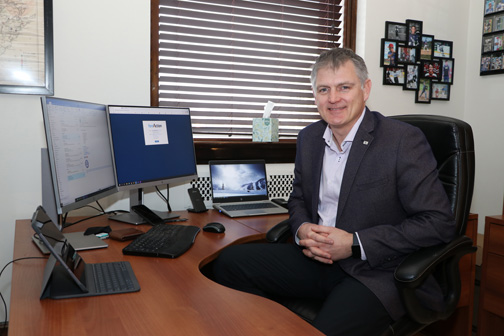 “Jason has been with the Town of Amherst for 22 years, rising to the position of deputy-CAO and director of operations before being appointed as interim CAO. The council has complete confidence in Jason’s ability to fill the position of chief administrative officer on a permanent basis and I personally know Jason will serve Amherst well in the CAO role. I very much look forward to working closely with him.”

MacDonald said he is thankful for the confidence the council has in him, as shown by his appointment to the position.

“I look forward to working with the council members and the town staff in a positive team-oriented environment as we continue our ongoing work of making Amherst a great place to live, work and play,” he said.

MacDonald was hired in 1999 to jointly serve the Town of Amherst and the Municipality of Cumberland as a land-use planner. He worked in that capacity until he became the town’s planning manager in 2001.

In 2014, MacDonald was appointed deputy-CAO-operations, adding the management of the town’s Public Works Department, and for a short while the Amherst Fire Department, to his duties.

With the resignation in 2019 of Bill Schurman, the town’s former recreation director, MacDonald added the management of recreational facilities to his duties. A final change in his duties occurred in 2020 when he took over the management of the town’s community well-being team following the resignation of former chief financial officer Shelley Rector.