Athletic Achievers recognized by the Town of Amherst

AMHERST, Nova Scotia – Eleven teams and 38 individuals who achieved gold medal performances at the provincial level or gold, silver or bronze at the national-international level in 2019 were honoured by the Town of Amherst on Feb. 11, 2020, during the town’s annual Athletic Achievers Award Ceremony.

“On behalf of all members of town council I want to congratulate all the athletes we are honouring here tonight,” Mayor David Kogon said. “These athletes achieved gold medal performances at the provincial level, or gold, silver or bronze medal performances at the national level. We recognize that it takes practice, hard work and sacrifice to reach the level of success that each of you have achieved.

“I hope you take pride in your performances for I can tell you the citizens of Amherst are proud of your accomplishments. Your successes encourage others to become more active and that helps Amherst reach its goal of becoming the most active, healthiest community in Nova Scotia.”

Kogon, Deputy-Mayor Sheila Christie and councillors Jason Blanch and Terry Rhindress then presented the athletes with certificates recognizing their success. In all, 175 athletes were recognized. 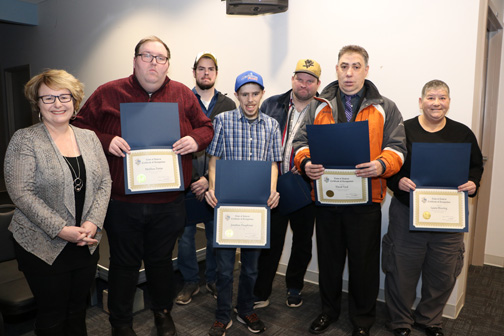