Christie Park is undergoing a refurbishment.

The park’s brick wall is having its masonry repaired and strengthened. In addition, new stairs and railings are being installed in the park.

“Christie Park holds a very important historical significance to the Town of Amherst,” said Chelsea Baird, the town’s horticulturalist who is overseeing the project.

“That is why we definitely want to emphasize this park and make sure we refurbish it back to the state that it once was in.”

It’s significant because the park’s brick wall was once the foundation of Christie Trunk & Bag Company Ltd., a manufacturer of luggage, coffins and caskets that played an important role in the industrial history of the town for about 100 years. The Albion Street plant closed in the mid-1960s and fire destroyed the structure in the 1980s.

The site was turned into a park shortly after, with the wall being preserved as a monument and reminder of the days when the town was known as Busy Amherst.

However, in recent years, the brick wall began to deteriorate. The decision was made by town council earlier this year to spend $15,000 to repair the masonry and install the new steps and railing.

“We’ve done quite a bit of concrete work as well as replacement of bricks,” Baird said. “We have been able to reuse quite a few of the bricks that were in place, but we’ve also had to use some new bricks as some of the old bricks were not salvageable.”

The brick wall and foundation were strengthened using concrete. Some of the concrete caps on the top of the wall were also replaced due to their condition, and all caps are being painted white in an effort to help preserve the concrete and improve the appearance of the park.

Town employee Vaughn Martin, a master mason, has been doing most of the masonry work since the refurbishment began at the beginning of November. He’s been aided 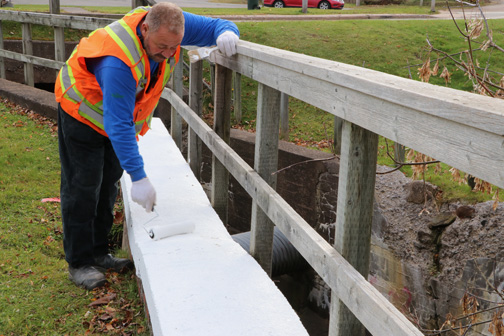 by Chris Robinson and Ryan Lalonde.

“Vaughn has been the main guy due to his masonry background,” Baird said. “We’re very fortunate that we have someone on staff who is well known for his masonry skills. To be able to have a staff employee put in the energy, the time and expertise into the project, as Vaughn has done, makes this project even more special.”

The work to refurbish the park is important, not only from a historical perspective, but from an everyday use perspective, Baird said.

“Christie Park is one of our more popular parks for weddings,” she said. “The tree canopy definitely provides quite a beautiful backdrop for wedding photos and weddings ceremonies.

“As a town, we have to put our best foot forward and keep all of our areas neat and tidy, while making sure they don’t present any safety hazards or eyesores within the town. This project helps us do that.”

The work, which will be completed by the end of the year, “is enabling us to continue bringing the natural heritage and the historical heritage together in a park that is both usable and practical for the residents of Amherst,” Baird added.