Family Violence Prevention Week proclaimed for the Town of Amherst

February 11-17 was proclaimed Family Violence Prevention Week in the Town of Amherst by Deputy-Mayor Sheila Christie on Feb. 11.

“We in Amherst promote living in a healthy community, but living in an abusive situation is most definitely not healthy,” Christie said, as Lydia Quinn, domestic violence case co-ordinator, Community, Indigenous and Diversity Police Services, RCMP/Police – North East Nova and a member of the Interagency Committee on Family and Sexualized Violence, watched her sign the proclamation.

“That is why it is vital that we bring an end to the silence that surrounds family violence,” the deputy-mayor said. “It is why the town encourages our residents to make themselves knowledgeable about this issue, and it is why we encourage anyone experiencing family violence to seek help from organizations such as Autumn House.” 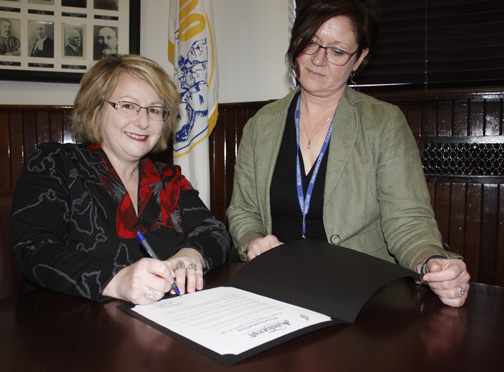 The proclamation states family violence in its many forms – child abuse, spousal abuse, woman abuse, sibling abuse, elder abuse – affects all people in Cumberland County. It calls on Amherst residents to share in the responsibility of “ending the silence around family violence by addressing violence in all its forms.”

Since its inception in 1989, Autumn House has helped more than 5,000 people – more than 50 per cent of them women – deal with the effects of family violence.

A Statistics Canada document titled Family Violence in Canada: A Statistical Profile 2017, the latest statistics available, indicated intimate partner violence accounted for almost 30 per cent of all police-reported violent crime in Canada in 2017 and affected almost 96,000 victims aged 15 to 89.

The document also indicated eight in 10 victims of intimate partner violence were women.

The federal statistics, while only dealing with intimate partner violence, demonstrate the need to address the issue through events like Family Violence Prevention Week, said Dawn Ferris, Autumn House executive director and a member of the Interagency Committee on Family and Sexualized Violence.

“The week helps us bring awareness to the problem of family violence in all its forms,” Ferris said. “The more we can make it easier for people to talk about it, the more likelihood victims will seek help.”

The committee has been working for more than two decades to make people aware of the harm family violence causes as well as the resources in the community that support those impacted by family violence.