Leonard Tower retires after 43 years with the Town of Amherst

Leonard Tower is putting away his shovel after 43 years with the Town of Amherst.

A sub-foreman with the Operations Department, Tower’s last official day on the job is today, Friday, May 28, 2021.

“They wanted to know if I wanted to come to work here as a labourer. I had to go to work somewhere, so I said sure,” Tower recalled in an interview 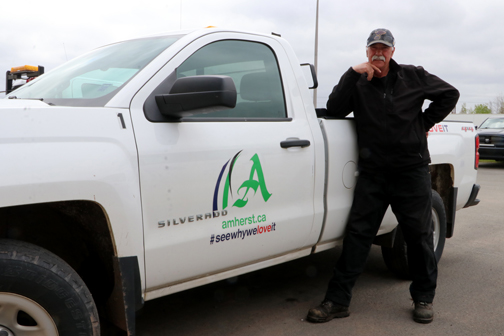 shortly before his retirement.

Back then, he worked for what was known as the street department.

“Basically, you came in at eight o’clock in the morning, you ran a shovel and a rake for eight hours and then you went home,” Tower said. “Back then, they wouldn’t let your drive nothing. You were just here to do labour work and that was it.

“My very first job, I worked with Gerald Chapman, Raymond St. Peter and Charlie Brown and we built the shoulders of the newly paved streets.”

It was intensive physical labour.

“We’d shovel gravel from the back of a three-ton truck onto the shoulder. Old Gerald would rake it out, they’d drive the truck ahead a bit and then you’d shovelled some more out,” Tower said.

“We’d shovel two loads in the morning and two in the afternoon. Then you’d go home and go to bed.”

Today, much of that work is done with machinery.

After five years on the job, Tower was transferred to the water department.

“I stayed in the water department until three years ago when I became the sub-foreman,” he said.

“Back then, you learned off the guy who ran it. For me, that was Bill Rushton. He was the lead hand. You picked up stuff from him,” Tower said. “When Bill became sub-foreman, I became the lead hand.”

During his time with the department, he worked on some major projects including the Tyndal Road Well Field and the reservoirs on Willow Street.

“The newest reservoirs, well I was here when the reservoir they replaced was built. I hauled gravel to them.”

Still, his main job during his 35 years in the water department, was maintaining the distribution system.

During that time things changed. He remembers using copper pipes and having to flare the ends of them with a hammer because there was “no such thing as a compression fitting.”

“Now the fittings have changed quite a bit. Now you can put them together with your eyes closed, tighten them up and it’s done,” Tower said.

Another major change to the water system was the introduction of chlorine, which followed the Walkerton water crisis in 2000 that saw six people die and more than 2,000 people get sick when E. coli got into the Ontario town’s water system.

“We got a crash course in putting chlorine in our water,” Tower recalled. “No one knew anything about it. We figured it out and got it running.”

During those years, Tower also plowed snow, something he admits, he will not miss. Nor will he miss heading out in the middle of the night to fix a broken water main.

“I will miss the guys. Let’s face it, they’re like my second family.”

As for retirement, Tower said he’s going to do “whatever I want.”

Pressed a bit, he admits, he and his wife would like to do some travelling.

“If this COVID stuff ever gets over, I like to get a fifth-wheel and a new truck, spend some winters in Florida.”