Fetal Alcohol Spectrum Disorder is a diagnostic term used to describe the impact on the brain and body of individuals who were exposed to alcohol prior to their birth, Mayor David Kogon noted on Sept. 3, 2021, as he signed the proclamation on behalf of Amherst town council.

“Individuals with Fetal Alcohol Spectrum Disorder experience some degree of challenges in their daily living,” Kogon said, quoting the wording in the proclamation. 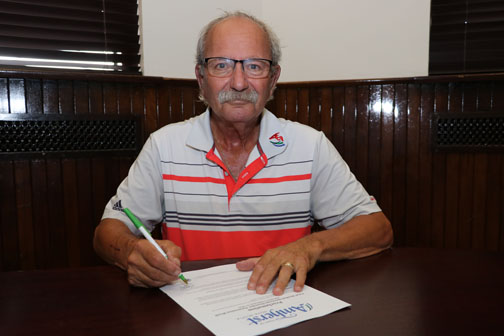 “I encourage our citizens to learn more about Fetal Alcohol Spectrum Disorder in order to help improve the prevention of the disorder as well as the diagnosis and support for individuals with the disorder.”

A federal government website indicates more than 3,000 babies are born in Canada each year with the disorder and about 300,000 people are currently living with it.

The website also indicates the birth defects and developmental disabilities resulting from the disorder can be prevented by avoiding the consumption of any alcohol during pregnancy.

“No amount or type of alcohol during pregnancy is considered safe,” the website states.

A news release issued earlier this year by the federal government announced it was giving $350,000 over three years to assist fasdNL, a Newfoundland and Labrador-based organization, in leading an Atlantic Canada-wide campaign to promote prevention and understanding of the disorder, increase the capacity for educating justice professionals on the disorder and supporting networks and collaborative action among the region’s stakeholders. The organization asked the town to issue the proclamation as part of that campaign.

“FasdNL and our partners across Atlantic Canada are grateful for municipalities, including Amherst, Nova Scotia, for their role in building awareness about Fetal Alcohol System Disorder,” said Katharine Dunbar Winsor, fasdNL executive director.

The federal government’s release noted Fetal Alcohol Spectrum Disorder is a complex and preventable disability that affects the brain and body of people prenatally exposed to alcohol.

“All Canadians deserve equal opportunities to thrive, which is why the Government of Canada is increasing awareness of FASD so that we can prevent drinking during

pregnancy, improve outcomes for those with FASD and those living with FASD can find support without stigma,” the release said.