The Town of Amherst is proclaiming April 8 to April 14 First Responders Week.

“Council wants to thank the members of the Amherst Police Department, Amherst Fire Department, Cumberland RCMP and the local Emergency Health Services paramedics for the outstanding service they provide the town,” Mayor David Kogon said as he signed the proclamation on April 1.

“We owe them our thanks because our First Responders are vital to the safety of our community; they are our first and best defence against emergencies and they often risk their own safety in order to protect our community.

“During the week, I urge citizens to take the time out of their busy schedules to offer their own thank you to our police officers, firefighters and paramedics.” 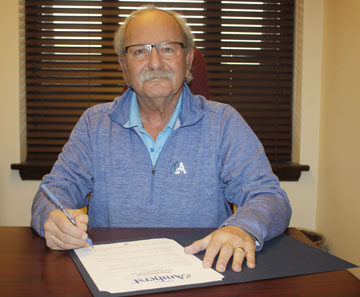 The thank you should also be extended to the families of First Responders, Kogon said.

“Our First Responders couldn’t do the fantastic job they do without the full support of their families,” he said. “We need to thank these families for the sacrifices they make so their First Responder can serve.”

The proclamation will be read on April 8 during a flag raising ceremony that will be held at noon at the flags by the YMCA, an event the mayor and council hope many citizens will attend in order to show their support for the First Responders.

Kogon also hopes people will come out on April 11 when an open house featuring exhibits from all First Responders will be held at the Amherst Fire Department between 4 p.m. and 7 p.m.

“We encourage parents to bring their kids to the open house and hope people of all ages will come out and see the equipment our First Responders use first-hand and to say thank you to those who serve this community with such dedication and professionalism,” the mayor said.